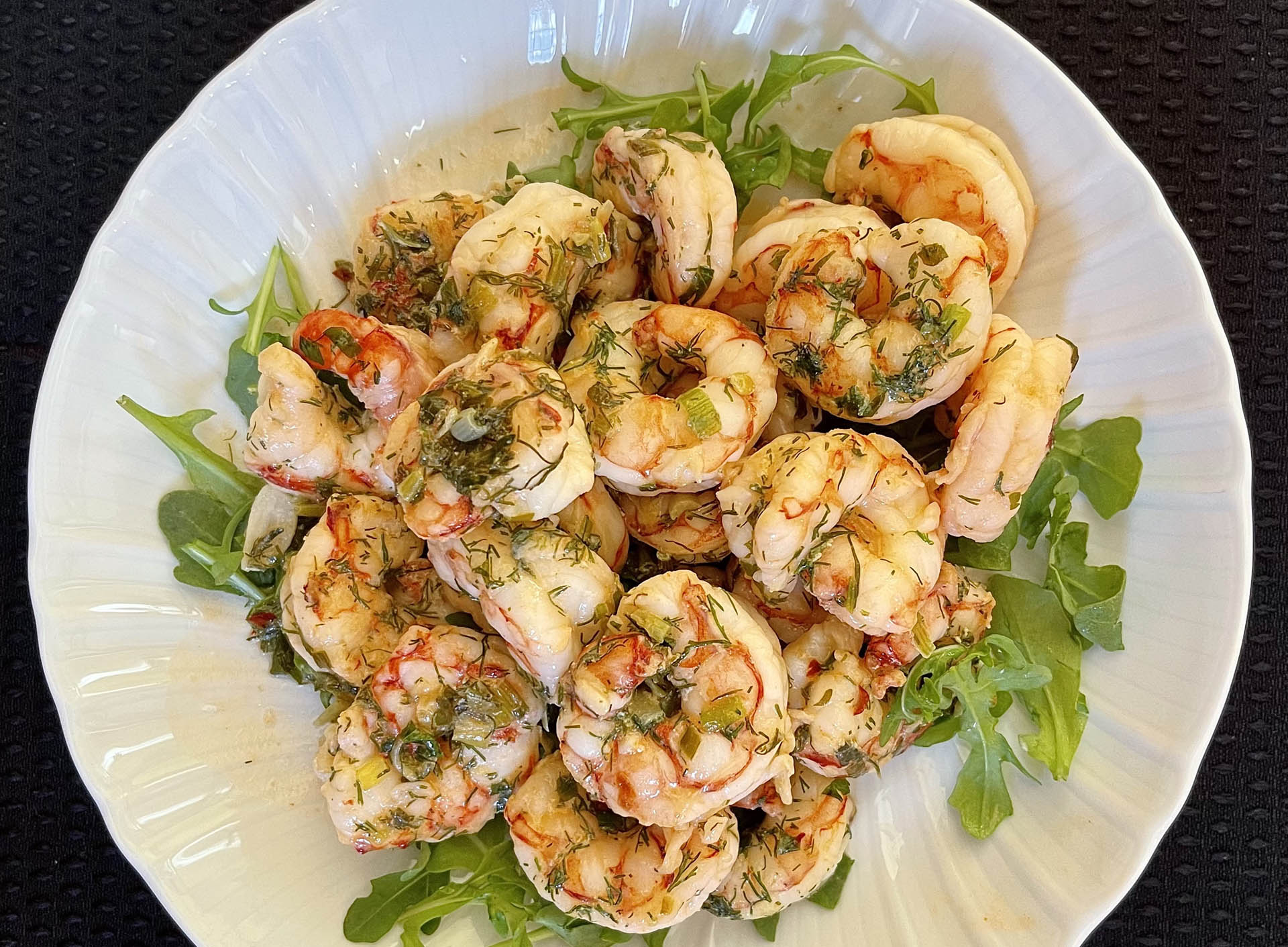 What a treat we had last night!

I discovered this variety of shrimp that is excellent: wild Argentinian pink shrimp. I always preferred wild caught shrimp, the only one I knew until a few years ago, as it is sometimes difficult to get knowledge of where the farmed shrimp comes from and what the rules are for farming in a particular country. Which is essential information when you read that farmed shrimp are often treated with antibiotics, and some of those antibiotics will end up in your body with all the consequences that you can imagine: resistance development and residual build up. Not to talk about the environmental consequences of unregulated farming.

Shrimp farmed in the US are by law never treated with antibiotics, but constitute a tiny slice of the market as production costs are too high. There is a ban on imports of treated shrimp, but only a small percentage of imports are actually tested. Wild Argentinian pink shrimp originates from the natural ocean habitat, so this is an added guarantee of superior quality.

This Argentinian variety is very flavorful, almost sweet, and reminds me of the flavor of the Mediterranean shrimp.

I found them thawed at the Santa Monica Seafood store and saw them also at Ralphs in the frozen section. They are slightly more expensive, already cleaned, deveined, and can be used in a multitude of ways. As an alternative I suggest the wild Louisiana shrimp, which usually comes shell on and not cleaned, so requires a little more effort; all completely worth the flavor though. If you are lucky enough to live near a coast rich with shrimp you might be able to get them fresh.

Shrimp has a very high level of cholesterol, which for a long time made it a banned food for a lot of people. But in the last years I read more and more articles saying that the dietary cholesterol is only accountable for a small percentage of our total cholesterol, thus allowing for more food items previously considered as bad for your health, like eggs and … shrimp. This is good news as shrimp is very rich in protein as well and very low in fat and calories, becoming a great selection for an entrée. I think, as always, that the secret is in eating it with moderation, which means a portion of 4oz per person will suffice.

The recipe below is quick and simple; the shrimp cooked this way can be a dish on its own or it can be added to a salad, or used as a base for a pasta sauce, or as an appetizer to be shared with friends.

2. Chop approximately one tablespoon of each herb and set aside in a bowl.

3. Drizzle the shrimp with 1-2 tbsps. Extra Virgin Olive Oil, season with salt and pepper, add crushed hot pepper if desired, add all the chopped herbs, mix well, cover with plastic wrap and let rest for half an hour at room temperature.

4. Heat up 1-2 tbsps. EVOO in a nonstick pan. The oil will not cover the whole surface of the pan.

5. When hot, transfer the shrimp in the pan: it will start sizzling. Spread around, cover with a anti spat lid, let it cook on medium flame for 3-4 minutes approx.

6. Turn shrimp on the other side, one by one with a tongue or by sautéing it. After a couple of minutes, when it almost starts to stick to the pan, add wine and lemon juice at room temperature, at once. You will hear a loud sizzling sound and some of the liquids will evaporate right away. Stir and let the sauce boil rapidly for 2-3 minutes.

7. Remove the shrimp with a slotted spoon and set aside. Reduce the sauce by half, almost until it starts burning around the edges.

8. Turn off the fire. When you are ready to serve, turn it on again until when the sauce is boiling, add the shrimp, stir, and serve very hot (also on steamed rice, or mashed potatoes, or toss in some tagliatelle).

Elisabetta Ciardullo is the founder of Think Italian! Events. As Personal Chef she is an ambassador of the Italian cuisine and culture, bringing it into the private homes of Americans, as well as to many corporate clients in Los Angeles.