As Far as Fish Are Concerned, Smaller Is Better

This article was inspired by Patagonia Provisions’ journal found here.

Even though the majority of people have stuck to their traditional habit of enjoying red meat as their main protein source, in the last 40 years, an increasing number of Americans have been moving away from red meats and transitioning towards vegetarian, vegan or so-called pescatarian diets.1 The science is telling us this is probably a good thing not only for our own health but for the environment’s health as well.

The only caveat to this transition is that overfishing as well as farming fish has been growing too, in order to satisfy the increasing appetite for seafood. According to the Independent, “fewer big, predatory fish are swimming in the world’s oceans because of overfishing by humans, leaving smaller fish to thrive and double in force over the past 100 years.” (I won’t go too in depth on the negative sides of farming fish in this article, but if you’re interested in learning more, I’d recommend watching Patagonia’s film Artifishal). 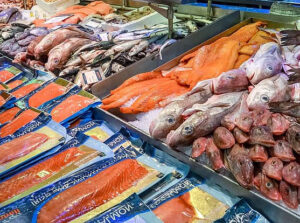 We all know and love our salmon, tuna and swordfish, and can definitely still enjoy these delicacies as long as they are responsibly harvested and wild, but let us turn our attention to the smaller guys: the sardines, anchovies, squid, herring and mackerel. Not only are these smaller fish more plentiful and have much lower mercury levels than fish higher up on the food chain, they are also excellent sources of protein, omega-3 fatty acids and vitamin B12.3 Because of this, when you make the switch from big to small fish, you’re not only doing something good for your own health, you’re also benefiting the environment, allowing wild food chains to re-stock.

The common misconception that our society has put on us is that food is food. If you see a $5 salmon steak which is farmed vs. the $10 wild-caught one, you’re at least considering saving $5 and taking the cheaper one. To many, this is justified as why would you want to spend 100% more on a seemingly similar product. What you are not considering are the ramifications of fish farming (Again, watch Artifishal for more information).

Let me introduce a concept not many people have heard about: The One Health concept. It takes into account the interconnectedness of environmental health and human health. Eating unsustainably managed farm-raised fish hurts ocean ecosystems and has a domino effect, destroying things we may not even consider related to eating fish. Just as using synthetic fertilizers and pesticides may grow produce more efficiently, nutrient density is different in the organic vs. pesticide-treated produce and when these chemicals get into runoff, they can cause harmful algal blooms in the ocean and can decimate entire ecosystems.

So which fish should you eat? According to the National Oceanic and Atmospheric Administration (NOAA) Fisheries website there are several options amongst the small fish:

The ongoing dietary shift from red meat and other animal products to seafood has been generally a good thing in regard to both human and environmental health. But once you have changed your dietary preferences to increased fish consumption, pay attention to where your fish comes from and what impact its harvest has on the environment. Even though farmed fish is cheaper, it is depleted of many of its essential health benefits. Importantly, the majority of fish farming is done in an unsustainable manner, which has played a direct role in countless wildlife catastrophes. On the other hand, even though wild salmon is more expensive, it is healthier and can be harvested in a sustainable manner. For example, Lummi Island Wild Salmon sources their wild salmon using reef nets, an ancient selective-fishing technique which allows minimal bycatch and enables the fishermen to select only the right sized fish.

And then there is the small fish option.

I suggest taking a break from eating the big fish in the ocean, whether they’re farmed or wild, and taking a closer look at smaller fish. In contrast to many European countries, it may be more difficult to find them in the grocery store or fish market, but I can assure you these smaller, sustainably caught fish listed above are delicious!