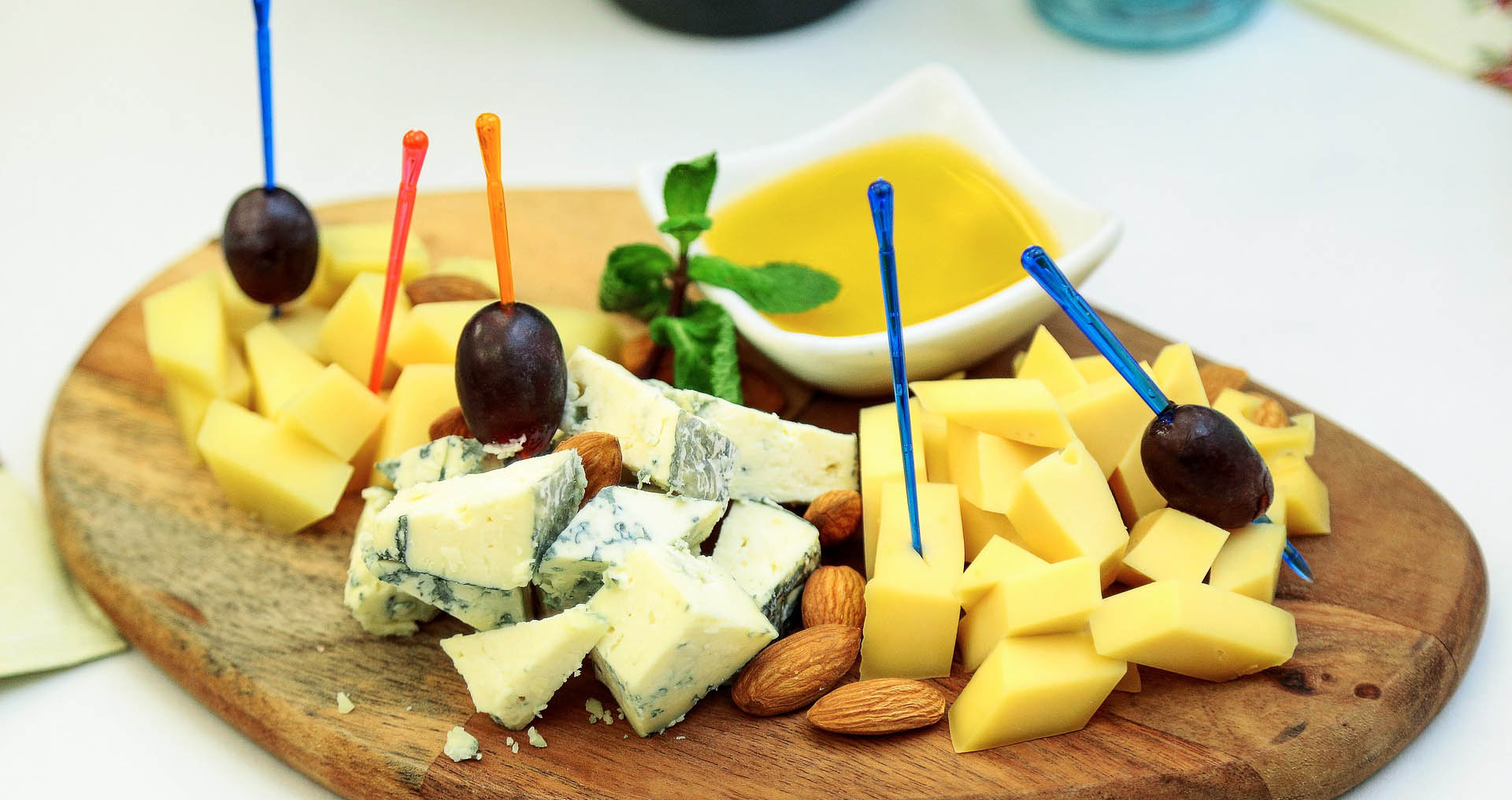 What’s Up with the Microbes in Your Cheese?

As most of us know, cheese consists of milk from which water is removed, leading to a concentration of milk proteins, fats, and nutrients. However, not everyone is familiar with the fermentation processes that are necessary for the manufacturing of cheese which largely depend on the activity of various microbial strains. A specific milk protein called casein coagulates and forms a gel as a result of microbial fermentation, a step which is key to making cheese last for a long time. Microbial fermentation also helps in the break-down of lactose into lactic acid, further enhancing the formation of curds or gel and the removal of water which was stored in the milk proteins. Once the gel has reached its desired consistency, it is cut into curds where more moisture, in the form of whey, can be removed during the draining step, and the cheese can be pressed into its desired shape. The next step in cheese production involves the addition of salt which serves as an inhibitor to further bacterial growth of the starter culture while also preventing the growth of pathogenic microbes and simultaneously selecting further growth of desirable microbes. Fresh cheese may be enjoyed right after the manufacturing process, whereas aged cheese is commonly stored from 6 months up to a year with the purpose of developing and strengthening its flavor and aroma.1

The identity of a specific cheese type largely depends on the microbial communities which contribute to making the cheese.2 The cooperation and competition of various microbes referred to as microbial ecology is an important requirement in cheese production. In the production of aged cheeses, a step called “succession” is critical for optimal outcomes. Microbial succession refers to the cheese microbial ecosystem changing its metabolic activities. This process involves the disappearance of microbial strains that are no longer required in the cheese making process, as well as the growth of new strains that will further contribute to the ageing process. Starter culture bacteria are the initiators of the fermentation process and consist of specific bacteria added to the milk at the very beginning of cheese manufacture. These bacteria then dominate the other cheese microbiota, allowing for the establishment of conditions that select for the next microorganisms which will then contribute their part to the ripening process.1 The activity of specific microorganisms is reflected in the aroma, texture, taste, and color of the final cheese product,3, 4 which is why microbes are a critical component of cheese-making, both for traditional cheeses as well as the more modern dairy-free versions.

The health-benefits of cheese and its microbes may include certain nutritious and probiotic benefits. Cheese in general is a very nutrient-dense food, providing the consumer with vitamins, minerals, and proteins. Furthermore, each piece of cheese consumed may contain about 10 billion microbes, the highest density being present in the rind of the cheese. Most of these microbes are believed to have neither a particularly health-promoting nor harmful effect on the host. However, some cheese microbes, like microbes from other types of fermented foods temporarily are incorporated into the human gut microbiome and may exert a probiotic effect. However, like the majority of ingested microbes, they will only be “tolerated” by the gut microbiome as long as they are being ingested. A large variety of cheeses contain different types of Lactobacillus and Lactococcus strains when ready for consumption,5 which are thought to positively influence human health by preventing gastrointestinal infections, improving protection against pathogens, strengthening the gut barrier and modulating the gut-based immune system.6 On the other hand, in the rare case that cheese is improperly being stored or manufactured, it can become contaminated with harmful organisms, which is why high production standards are key for the safety of cheese consumers. Overall, it can be said that “microbes make the cheese”1 which is true for traditional cheeses made from different types of milk, as well as the large variety of dairy-free cheeses that can be found on the market today.

In summary, besides their crucial role in the food cultures of many countries around the world – France alone has more than 1000 types of cheeses – it remains to be determined what if any health benefits come with the regular consumption of cheese. If a variety of cheeses is consumed in small amounts on a regular basis, it is likely that the ingested microorganisms will temporarily become part of the gut microbiome, increasing its richness, diversity and relative abundance of short chain fatty acid producers, such as lactobacilli. On the other hand, ingesting large amounts of processed orange or yellow cheese with cheeseburgers and pizza, the negative health effects of high saturated fat and calorie consumption far outweighs any benefits that might come from the microbiota.