The Unexpected Power of the Unconcealed Placebo

Since the 1940’s placebo-controlled studies have been the gold standard to evaluate the effectiveness of any kind of therapy, be it dietary, pharmaceutical, or targeted at the mind. Only those treatments found to be better than placebo in a so-called double-blind placebo-controlled trial (a trial in which neither the patient nor the physician know if a person receives the active treatment or the placebo) are considered to be effective in clinical medicine. Within a decade of the introduction of placebo-controlled trials, clinical researcher Henry Beecher published a landmark paper entitled “The Powerful Placebo”.1 In this paper he reported that approximately 35% of patients receiving placebo (generally in the form of indistinguishable sugar pills) had clinical important improvement in symptoms in clinical trials from a number of different diseases. The assumption that he made was that patients responded to placebo because they were “blinded” (i.e., didn’t know whether they were receiving the active treatment or placebo) and that their expectation they might be receiving the treatment led to the improvement in their symptoms. This assumption has since been considered dogma– i.e., that in order to generate expectations about improvement placebos need to be concealed or blinded in order to be effective in clinical trials. Indeed this assumption has shaped much of our understanding and research into the mechanisms of placebo.

In 2010, our group at the Beth Israel Deaconess Medical Center in Boston, published the first trial to potential refute this dogma.2 We reported results from a trial in which participants with irritable bowel syndrome (IBS), a chronic disorder characterized by alterations in brain gut interactions, had clinically significant improvement when given non-concealed, ‘open-label’ placebos (OLP), e.g., they as well as the investigator knew they were receiving the sugar pill. In this initial study 82 IBS patients were randomly assigned to receive either OLP or usual care (i.e., no-pill control) for three weeks. Surprisingly, IBS participants who knowingly received OLP reported greater improvement in their IBS symptoms than participants in the no-pill control. Thus, this finding was the first to challenge the conventional belief that placebos, in order to generate expectations of improvement in a patient needed to be concealed in order to be effective. However, since then trials in patients with chronic low back pain, knee pain, cancer-related fatigue, migraine headaches, among others, have found similar results.3, 4, 5 Together these findings refute the requirement that patients need to be kept in the dark if they receive active or placebo treatment in order for the sugar pills to be effective. They also suggest the possibility that OLP treatment may be a safe and effective treatment for some of the symptoms associated with chronic conditions, such as IBS or other chronic pain conditions which lack adequate treatments.

Our group’s most recent study published in the journal Pain expanded the results of open-label placebo in IBS by including a larger number individuals with IBS and extending the treatment period to 6 weeks, and, for the first time, compared improvement in open-label placebo (a condition in which the physician and participants knew that participants were getting a sugar pill) to double-blind placebo (where neither participants or investigator knew if they were receiving active or placebo treatment).6 In this study, we randomly assigned 262 individuals with IBS into one of three study arms; 1) open-label placebo; 2) double-blind (which included double-blind placebo or double-blind peppermint oil); or 3) no-pill control. The individuals included in the study had moderate to severe IBS, the majority were women and the average age was in the 40’s. A validated questionnaire, the IBS-Severity Scoring System was used to measure improvement in IBS symptoms. This scale measures key symptoms of IBS including the frequency and severity of abdominal pain and distention, quality of life and satisfaction with bowel habits across a scale of 0-500. A decrease in > 50 points on this scale has been shown to be clinically meaningful to patients. 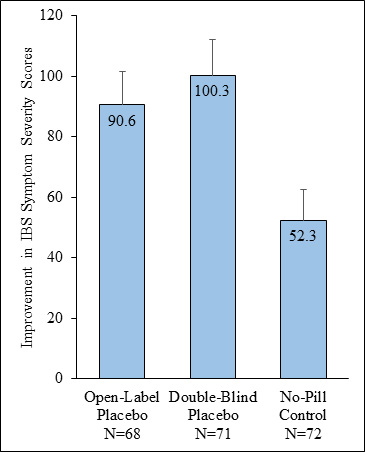 After 6 weeks, as shown in the figure, individuals receiving open-label or double-blind placebo, in other words both received a sugar pill, had greater symptom improvement compared to individuals who were in the no-pill control group. Surprisingly, there was no difference in symptom improvement between those who were told they were receiving a sugar pill, and those, who didn’t know if they were receiving placebo or not.

The results of this study suggest that concealing information if the patient was receiving a placebo or not may not be necessary, at least in some conditions, for placebos to result in clinically significant improvement. Amazingly, these results confirm that open-label placebo is able to provide clinically meaningful improvement in IBS symptoms and that the benefits persist over 6 weeks. The current study also shows that the improvement in IBS symptoms with open-label placebo is similar to that with double-blind placebo. The assumption proposed by Henry Beecher in 1955 that individuals receiving double-blind placebo improved because they expected to receive a treatment may therefore be wrong. Further research is needed to understand the mechanisms of placebo so that placebos can be harnessed in clinical practice and to improve clinical trial design.

Anthony Lembo, MD is a Professor of Medicine at Harvard Medical School. He also serves as the Director of the GI Motility Laboratory at the Beth Israel Deaconess Medical Center (BIDMC) Division of Gastroenterology in Boston, MA.

Experiencing the stunning beauty of nature is one