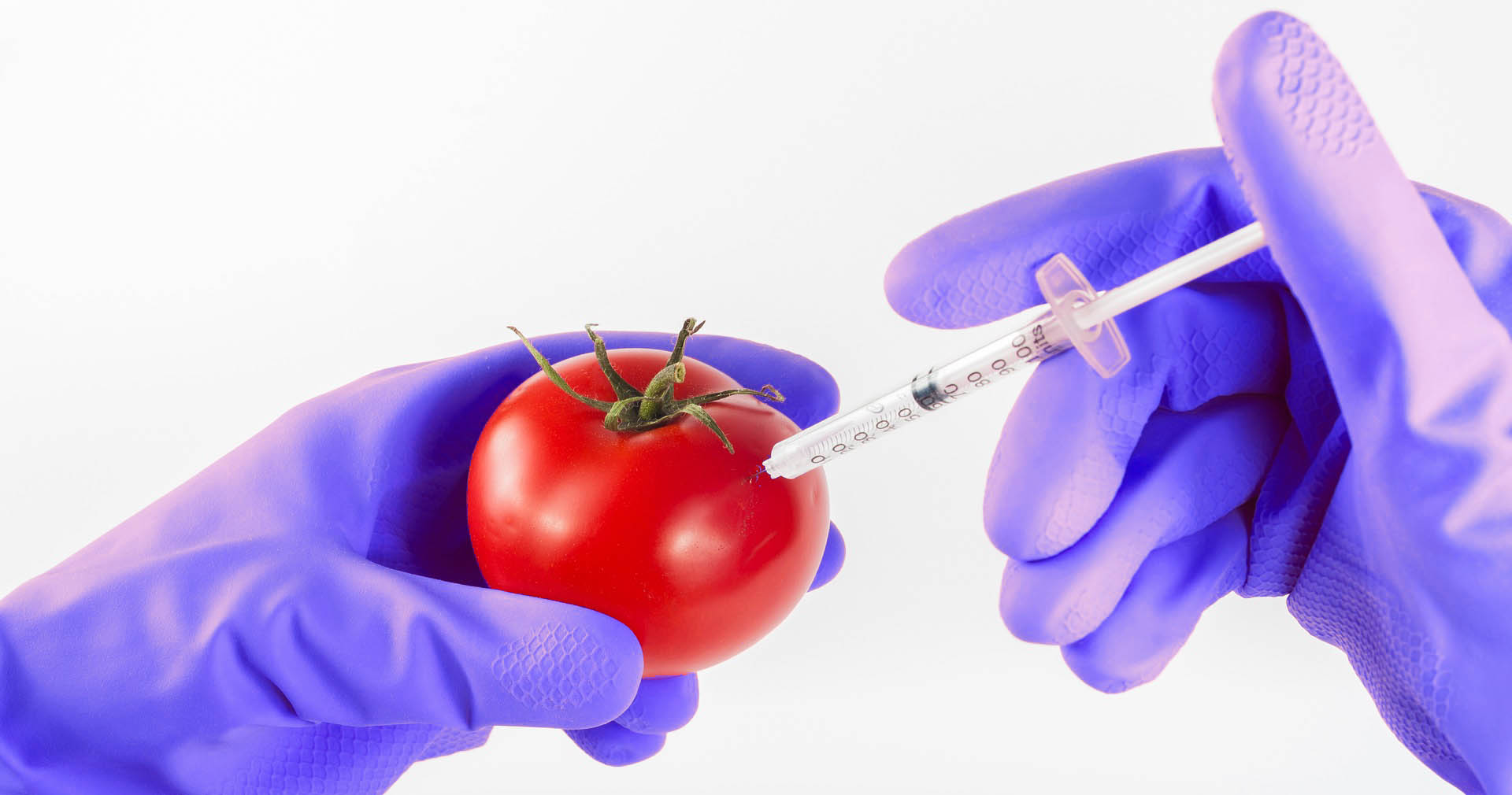 The Fear of the Unknown: GMOs

GMO, or genetically modified organism, has become the common term used to describe a food that has been developed through genetic engineering, a technique which involves copying the gene of a desired trait from one organism and inserting that information into the DNA of another organism to create a new one. While GMOs are often met with distaste by consumers, the reality is that almost everything we grow and eat today has had its DNA altered. For millennia, humans have been using traditional methods of genetic alteration such as cross breeding and selective breeding to produce a plant or animal with specific desirable traits. Most of the foods we eat have been genetically modified through these traditional breeding methods – the strawberries we are used to eating today are a cross between a strawberry species native to North America and a strawberry species native to South America. For farmers trying to produce a crop with specific traits, the traditional cross-breeding method of genetic mutation is hard to control and a very slow process that may never result in the desired outcome. In the past few years, genetic-engineering tools like CRISPR have created a shortcut for this alteration process by targeting the exact gene that controls the trait and producing the desired product in a significantly shorter span of time, making genetic modification much easier.

A common concern for many consumers is the “unknowingness” of potential long term health effects of genetically modified foods due to the constantly evolving science of genetics. Despite this fear, plant geneticists do not see GMOs as a major risk, backing up a 2016 study by the National Academy of Sciences which found that GMOs were generally safe to consume. This fear of uncertainty reflects the fact that most people don’t really understand how genes work and the concern over consuming GMOs is not based on actual science. This is true for food in general – people like to think they know where their fruits and vegetables are coming from so when they hear that their carrot was genetically engineered or cross bred to have a desired trait, it can take away that preconceived notion of what is “natural”.

While the alterations of plant genes per se does not seem to have side effects harmful to our health, in the U.S. GMOs are often associated with the harmful effects of industrial agriculture. The primary goal of producing GMO foods is to increase the yield per acre of mass produced foods which involves the steadily increasing use of chemicals that kill pests and weeds that compete with the monocrop production. These particular products such as GMO corn, used in the production of high fructose corn syrup, were introduced to the public as “corporate products focused on profit” which has tarnished many Americans’ views by associating GMOs with the broken food system.

Our industrialized agriculture system relies heavily on the 1.1 billion pounds of pesticides sprayed annually on crops in the US used to control weeds, kill insects and prevent mold/fungal diseases. Not only are pesticides and herbicides harmful to the environment by contaminating water sources and throwing off whole ecosystems, they are also extremely damaging to human health. A lesser known effect of the haphazard use of these toxic chemicals is their harmful impact on the gut and soil microbiome. The use of pesticides reduces the soil microbial communities and creates a vicious cycle: the more the soil microbiome is compromised, the less efficient the plant’s polyphenol production to fight against pests and diseases which creates a greater need for chemicals. The reduction of the natural cycle of nutrients and resilience causes an unhealthy and unbalanced soil ecosystem that is more vulnerable to pests and pathogens. Similarly for humans, exposure to these toxic chemicals can alter the gut microbiota and can cause adverse health effects such as immune dysfunction, reproductive and developmental effects, increased risk of chronic diseases and other risks associated with exposure to environmental contaminants. A reduction in the use of pesticides and a shift to regenerative-organic farming practices is necessary in order to decrease harmful exposure to toxicants and improve soil and gut health.

Despite the undeniable negative health effects of chemical agriculture, many environmental groups have quietly taken back their opposition to genetic modification as more evidence has come out that GMOs are both safe to eat. For example, the introduction of genetically altered crops such as Bt corn and Bt eggplant led to a significant drop in insecticide use because they contain a gene from Bacillus thuringiensis, a naturally insect-resistant bacterium that organic farmers routinely spray on crops. In Bangladesh, where Bt eggplant is widely grown, farmers have actually embraced the use of flood tolerant “scuba-rice”, a variety engineered to survive being submerged for up to 14 days instead of 3, because of the stability and benefits of these modified crops. The results are especially significant in Bangladesh and India where they lose an estimated 4 million tons of rice to flooding – which can feed 30 million people – per year and waste a corresponding volume of herbicides and pesticides, which then enter the groundwater.

Another example of the possibilities of genetic modification is in Northwich, England where plant biologist Cathie Martin, who has spent over two decades studying tomatoes, has been breeding tomato plants (non-GMO) that naturally produce certain vitamins and neurotransmitters such as vitamin D, resveratrol and serotonin. Martin has also developed a tomato plant that produces levodopa, the drug used to treat Parkinson’s diseases with the goal of creating a more tolerable and affordable alternative to the standard medication. These crops would be added to the growing list of “biologics”: plants or bacteria that have been genetically engineered to produce the active ingredient in medications to treat diabetes, breast cancer and arthritis.

While genetically modified produce is being used as medicine in England, the United States is facing a public health crisis partially due to the lack of fruits and vegetables consumed in the American diet. With only ten percent of Americans eating the recommended amount of fruits and vegetables and teenagers eating even less, the average American diet continues to decline in nutrients and increase in sugar and food additives, fueling the rising obesity epidemic. While people know they should be eating fresh produce, the cheap prices and convenience of processed foods that line the shelves tends to be more appealing compared with the time and energy it takes to prepare vegetables. In an effort to get Americans to eat more produce, companies like Pairwise are genetically editing fruits and vegetables (that are not considered GMOs) to make them more appealing to consumers. Haven Baker, the founder of Pairwise has been working on a new project that produces more palatable, nutrient dense alternatives to standard vegetables found at the grocery store such as milder version of mustard greens with added fiber and nutrients. Although altering the natural traits of a crop to meet people’s tastes can be quite controversial, it has been proven that changing people’s behavior is extremely difficult and if we want Americans to consume more fruits and vegetables this offers an alternative solution.

As climate change continues to put our food sources at risk, many farmers and scientists are looking at GMOs as a potential solution to produce enough food to feed the growing global population. As agriculture has industrialized and monocultures have replaced wild varieties, genetic diversity has diminished. Genetic engineering and GMOs could help restore the loss in biodiversity that they originally helped decline by bringing back rare and heirloom varieties and making certain crops hold up better to disease and harsh weather. Unfortunately, this type of restoration is too costly for small-scale GMO producers and is unlikely to come from large agrochemical companies who don’t see a large financial payoff from the project.

While some skepticism and distrust around genetically altered food will most likely remain amongst consumers, there is a growing list of evidence backing the safety of GMOs. While we continue to face worsening environmental and public health issues largely caused by the industrialization of our food system and declining biodiversity, GMOs can offer a wide range of viable solutions that are currently being tapped into with increasing interest.