According to recent science summarized in a blog post by Anne Bikle and David Montgomery published in Nautilus and discussed more extensively in their book “The Hidden Half of Nature,“ the answer is a definitive yes. 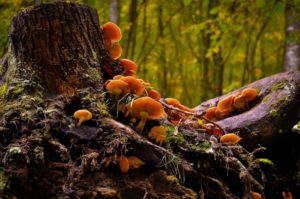 The authors describe not only the astonishing interconnectedness between what we feed our plants and how these plants feed us. But they also draw attention to the intriguing parallels between how the roots and microbes living in the soil (the root microbiome) communicate with each other, and the interaction between the gut microbiome and our intestinal tract. Just like their cousins in the gut, soil microbiota, including fungi produce thousands of bioactive molecules from the organic matter in the surrounding soil which they use to communicate with each other and with the plants. “Soils rich in organic matter are like human diets rich in fiber. Each is an important food source for the root and the gut microbiome respectively” say Bikle and Montgomery. For example, while the gut microbes metabolize the amino acid tryptophan into serotonin and other neuroactive substances, which regulate our sleep, appetite and overall wellbeing, the soil microbes metabolize the same amino acid into another compound called indole-3-acetic acid, which is a major growth hormone for the plant.

In order to provide a friendly environment for the surrounding microbes, the roots excrete a cocktail of molecules which attract and nourish the microbes. As a matter of fact, it has been estimated that up to 1/3 of the plant’s energy goes into the production of this microbe meal! The symbiotic relationship between plants and soil microbes results not only in abundance and diversity of the root microbiome, but also in the optimal supply of minerals and other metabolites back to the plant. These microbe derived substances are essential for the production of thousands of so called phytochemicals, which help the plant to defend against pests and diseases. For example, when a pathogenic microorganism infests the leaves of a plant, the plant sends a chemical message down to its roots, instructing them to send out signals to nearby microbes which colonize the roots and provide them with phytochemicals which are transported back up into the plant to repel the pathogen! 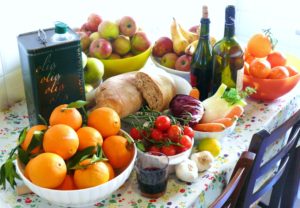 And here the story really gets interconnected!

Phytochemicals include antioxidants, anti inflammatory compounds and the so called polyphenols. The latter are a family of several thousand large molecules that give some fruits and vegetables their natural colors, but also exhibit health promoting properties: Polyphenols are contained in many food items, in particular in red grapes, many berries, almonds, flax seeds, coffee, tea, pomegranate juice and olives. Presumably these fruits, seeds and leaves contain high concentration of these molecules to protect them against diseases. The older and healthier the olive tree, the higher the concentration of these polyphenols are contained in the fruits as well as in the leaves of the tree! So what happens to the polyphenols we consume with a glass of red wine made from organically grown grapes or a teaspoon of olive oil from ancient trees? As these molecules are too large to be absorbed intact by our small intestine, they end up as food for our own gut microbes which are eager to gobble them up and metabolize them into smaller molecules which can then enter our own circulation and continue their health promoting functions: Protecting us against cancer, low grade inflammation, cardiovascular and neurodegenerative disease. These disease fighting molecules can be seen as the words of a universal biological language which are used by microbes in the soil and in our gut, by plants, and by our body.

Besides the fascinating story about interconnectedness of what goes on in the soil and how we grow our plants, there are important practical lessons for our health. Just as antibiotics and hygiene have played a major role in eliminating many infectious diseases and have contributed to the longevity of people living in developed countries, modern agriculture has been extremely successful in increasing the yield of macronutrients through intense use of fertilizers and pesticides. However, both achievements have come at a major and often ignored cost: While antibiotics, excessive hygiene (and the Western diet) have greatly reduced the diversity and abundance of our gut microbiota, increasing the risk for chronic disease, modern agriculture has resulted in beautifully looking plant based foods which are depleted in the thousands of health promoting and disease fighting molecules which are essential for our health.

So if you follow the prudent recommendation of eating a largely plant based diet, make sure you base it on fruits and vegetables that not only look good, but have been produced with considerations of a healthy soil microbiome. In addition, taking supplements of individual molecules provided by a multibillion dollar industry is no substitute for the healing power of thousands of different health promoting molecules generated by the invisible microorganisms living in the soil, that come with an organically grown plant based diet.