Can the Iceman Tell Us Something About the Healthiest Diet?

The “Iceman” or “Ötzi” refers to an individual whose mummy was found about 10 years ago in the receding glaciers of the Ötztal Alps a mountain range in the central Alps between Austria and Italy. His well preserved body has been stored in a cooling chamber of the Archeology Museum in Bolzano, Italy, and is probably the most thoroughly investigated individual from the Neolithic period. 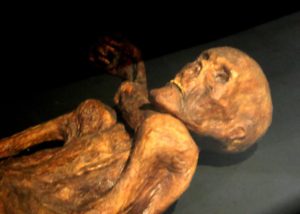 Can the stomach contents of this individual reveal something about the preferred diet of people transitioning from a hunter gatherer to an agrarian lifestyle, and the associated health benefits?

To answer this question, investigators have examined the stomach contents of this 5,300-year old European glacier mummy who according to the latest forensic studies was killed by an arrow shortly after enjoying his last meal. The study revealed that the Iceman had a remarkably high proportion of fat in his diet, supplemented with fresh or dried wild meat and ancient grains. An earlier study had demonstrated that the gut microbial composition of the Iceman was more similar to microbiomes of agrarian societies (and of primates), suggesting a predominantly plant based diet with an occasional treat of wild game.

Do we have any evidence for the health benefits of this ancient diet? The investigators were surprised of the large amount of animal fat found in the person’s stomach. The investigators asked: “Did he load up on fatty meat to meat the caloric needs of roaming in the extreme alpine environment in which he lived and where he was found at 3,210m above sea level?” On the other hand, the intake of animal adipose tissue fat has a strong correlation with increased risk of coronary artery disease. There was evidence on computer tomographic scans of the Iceman that he had major calcifications of his major blood vessels consisting with advanced atherosclerotic disease state, a surprising finding in an individual who likely got regular vigorous workouts climbing up and down the mountains in his backyard. He was in his 40s, the average life expectancy of people of his time, half of our current life expectancy.

Obviously, the study only provides a snapshot of dietary habits of this time, and tells us little about the average intake of different types of food and the relative proportion of carbs, protein and fat. However, in view of the presence of grains and carbohydrates in his stomach and the composition of his gut microbiome, the Iceman was certainly not adhering to a strict paleo diet.

Even though many other factors are obviously involved, it is surprising that when comparing cardiovascular health and longevity, our often maligned North American diet combined with our sedentary lifestyle is associated with much better health outcomes than those of our Neolithic ancestors, something to consider when claiming health benefits from ancient diets high in meat and animal fats.