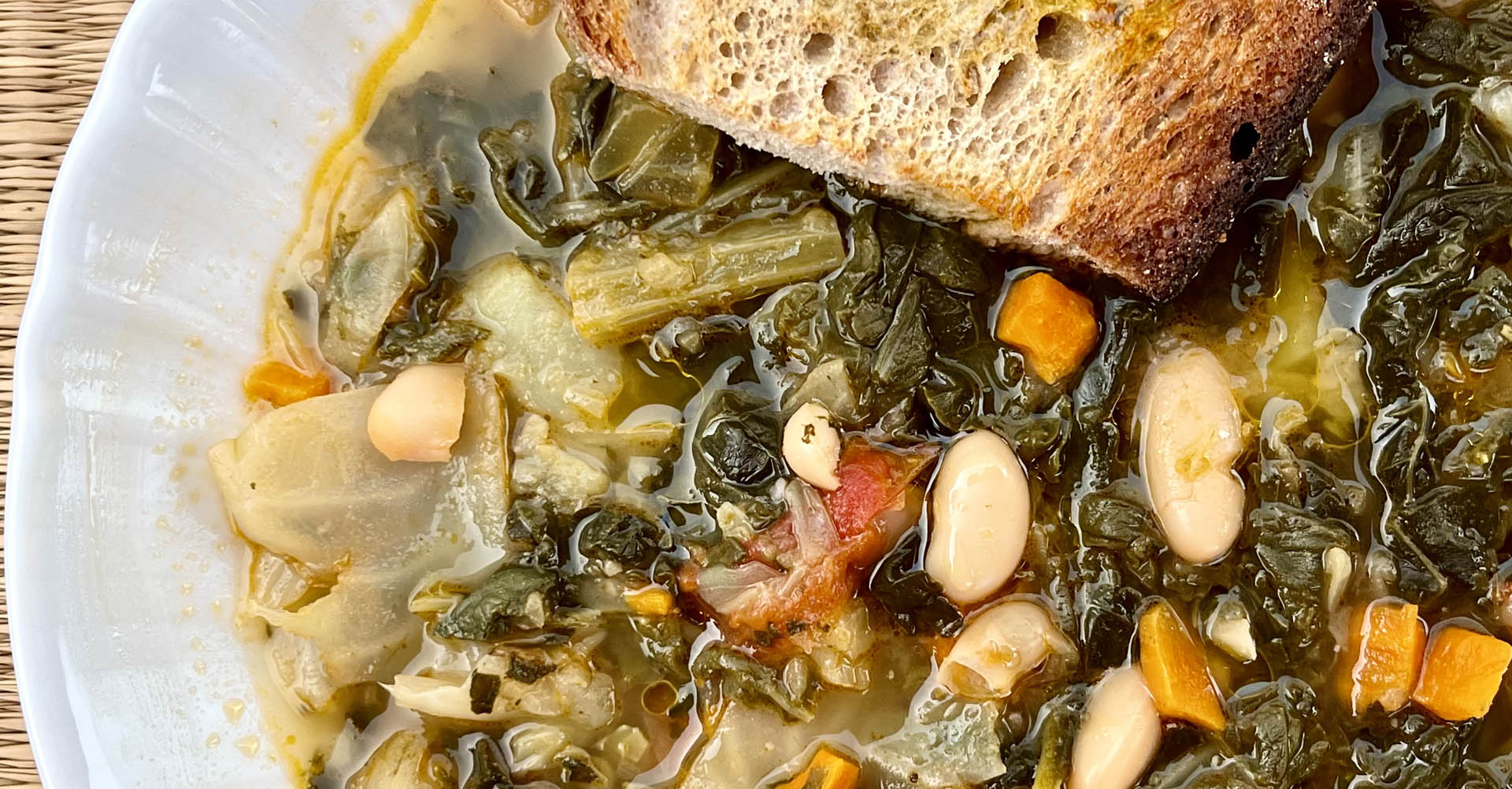 Ribollita is the boiled-twice hearty soup from Tuscany. Its origin, in a simplified version of the XVI century, points specifically to the beautiful town of Arezzo, close to where my mother was born. A few summer vacations spent there as a kid at some cousins’ casale (rural farmhouse), make it easy for me to imagine how and why this simple, vegetarian soup was created. In catholic Italy, Friday was a day where no meat could be eaten, so the habit of putting together some vegetables and let them boil for hours on a Friday was born. To get rid of all bread leftovers of the week, stale bread was added to the soup to make it thicker and give it the consistency of a vegetarian / vegan stew ante litteram. Consider also that all the ingredients were readily available in the vegetable garden that every farmer maintained, so the dish was typical of the “cucina povera” tradition, namely cooking with few inexpensive ingredients, but still making some appetizing dishes. The soup was re-boiled before consumption, even more than once, and each re-boiling concentrated and enhanced the flavor.

There is a general consensus about the ingredients to use, but as always in Italy, each family has its own recipe, or maybe the twist is simply a consequence of what is available in the pantry. Two ingredients are always present though: lacinato kale and beans. The first is also known as black kale, or, in English, as dino kale for its bumpy, dark green leaf. Usually, this kind of kale grows in winter, it is very resistant to cold temperatures and actually needs to be exposed to ice-cold nights to become more tender. All of which of course never happens here in California, where we can enjoy this tasteful and healthy vegetable all year long. Black kale, as all the other members of the large kale family, has been shown to have significant health benefits.

On top of that, black kale contains a massive amount of polyphenols and antioxidants, which through their anti-inflammatory effects are thought to decrease the risk for many chronic diseases including asthma, diabetes, Alzheimer’s disease, rheumatoid arthritis and many more. It also contains large amounts of carotenoids, who help ensure eyes’ health. The beans used are mostly Cannellini, a variety of medium sized white beans typical from Italy, but they can be substituted with pinto beans.

Ribollita used to be a winter staple, but with the ingredients available all year round, it is delicious and satisfying as well when consumed in summer at room temperature.

1. Put a large pot of water to boil, add salt if desired.

3. Chop onion, carrots and celery in the food processor.

4. Put a large non-stick pot on the stove, drizzle some extra virgin olive oil on the bottom, 2-3 tablespoons. When hot, put the onion, carrots and celery to fry gently for 10 minutes, stirring from time to time. In Italian this mix it is called “soffritto” and it is used for many different preparations.

5. Chop the cabbage, add it to the soffritto, keep cooking and stirring, add some more oil if necessary.

6. Chop the tomatoes, add them to the main pot, keep frying gently and stirring regularly

7. Add chopped parsley to the mix.

8. Chop the kale, throw it in the boiling salted water, let it cook for 10 minutes. When ready remove from the water with a slotted spoon or a spider strainer, squeeze all the water out, and add to the frying soffritto.

9. In the same boiling water cook the chopped chard for 10 minutes too, and again drain and add to the main pot.

10. Cube the potatoes and put it in the boiling water.

11. Now add all the vegetables back to the boiling water, cover and let cook gently for an hour or two, making sure that there is always enough water.

12. In the meantime, cook the cannellini beans in a separate pot with boiling water (enough to largely cover the beans), 3-4 sage leaves, 2 cloves of garlic, for an hour if coming from a can, 2 hours at least if soaked overnight; when cooked, drain half of the beans and reserve. Add the beans and the water from the pot to the boiling soup.

13. Mix the drained beans with a food processor until creamy. Add to the soup toward the end of the cooking time (if not the soup will be too dry and will start to dangerously stick to the bottom).

15. Adjust salt (but careful: it becomes saltier when you re-cook the day after) and pepper, turn off the stove and let it cool down, refrigerate overnight.

16. The day after, bring again to boil, add just enough water to make it cook without sticking.

17. Toast stale bread, put it in the serving bowls.

18. Pour the soup on top. Let it stand for a few minutes until soaked. Drizzle generously with Extra Virgin Olive Oil.

And always remember: Italian cuisine is made for cooks at heart, follow your gut feeling and add or reduce quantities as you like!!