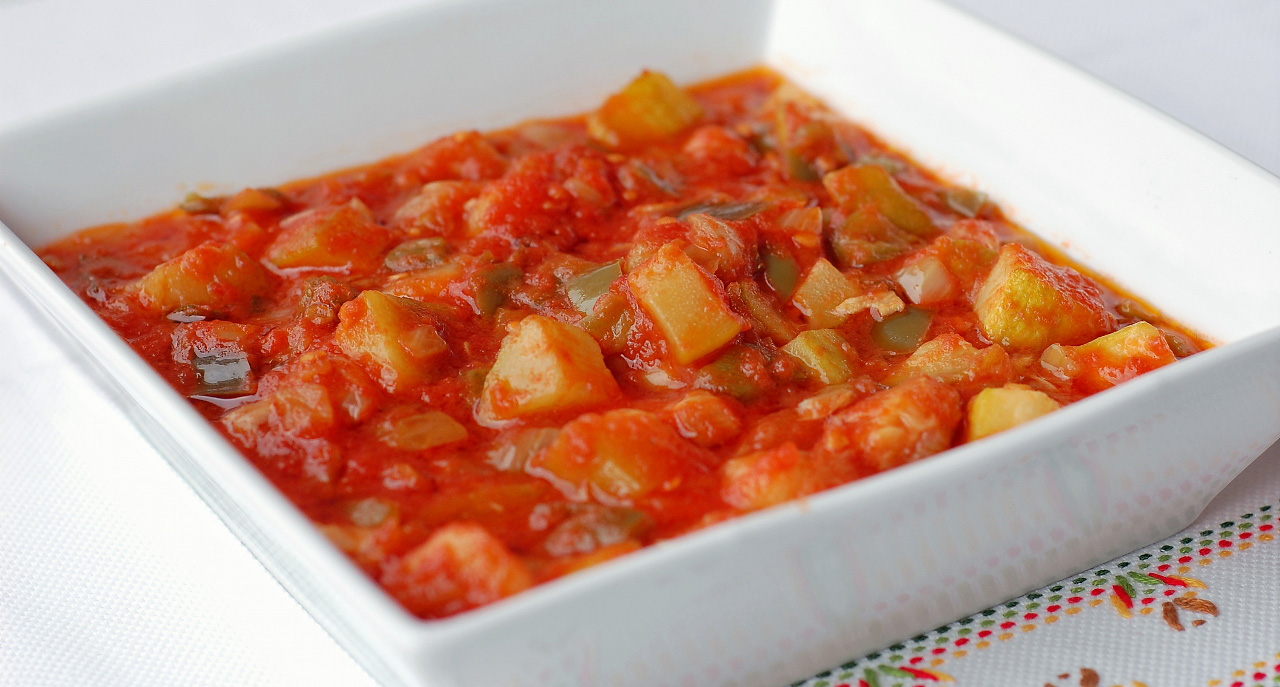 Pisto Manchego is a traditional Castilian dish that originated in La Mancha region in central Spain. Pisto in Spanish generally refers to diced vegetables of all kinds. It is derived from the Latin word pistus meaning crushed or pounded. The most popular versions of pisto include pisto andaluz from the Andalusian region, pisto toledano from Toledo and pisto bilbaína from Bilbao, the Basque region, which includes scrambled eggs. The Basque version makes this kind of pisto very popular among vegetarians, because of its simple preparation and the use of commonly available vegetables.

The origin of pisto is believed to be from the ancient Moorish dish al-buraniya or as it is known in Spanish as alboronia. In the year 822 Al-buraniya was specially created and served at the wedding of the Moorish princess Būrān. Hence the name al-buraniya in her honor. There is no doubt that today’s Spanish cuisine is still influenced by the Arabic flavors. The Moors ruled the Iberian Peninsula for seven centuries (700 AD to 1400 AD). Moors introduced the technique of frying in oil to the Spanish community and advanced the production of olive oil.

Originally this dish was cooked outdoors in the fields with easy-to-get local produces by farmers in La Mancha. The real pisto only has green and red bell peppers, tomatoes, and zucchini, but the vegetables used varied depending on the area, season, or local preferences.

The ancient recipe only had eggplant, olive oil and garlic. The discovery of the Americas brought new products such as tomatoes and peppers, these elements soon became basic in Spanish cuisine. Over the years, eggplant was gradually replaced. In today’s pisto, tomatoes and bell peppers are a must and as per the availability other vegetables are included. It is a vegetarian dish that makes use of the Mediterranean vegetables that are in season.

2. Heat the Extra virgin olive oil in a deep pan. Reduce the heat and add onion and garlic and let it cook for 15 minutes over low heat, stirring regularly.

3. Add bell pepper and cook for another 15 minutes, stirring regularly.

5. Simmer on low heat for 1 hour, or until the liquid is evaporated, stirring frequently.

The tomatoes must still be juicy, but without the remaining liquid released by the other vegetables. All the vegetables must be well incorporated.

Pisto can be served both hot or cold and can be accompanied with, rice, pasta, potatoes, quinoa or alone topped with a fried egg.