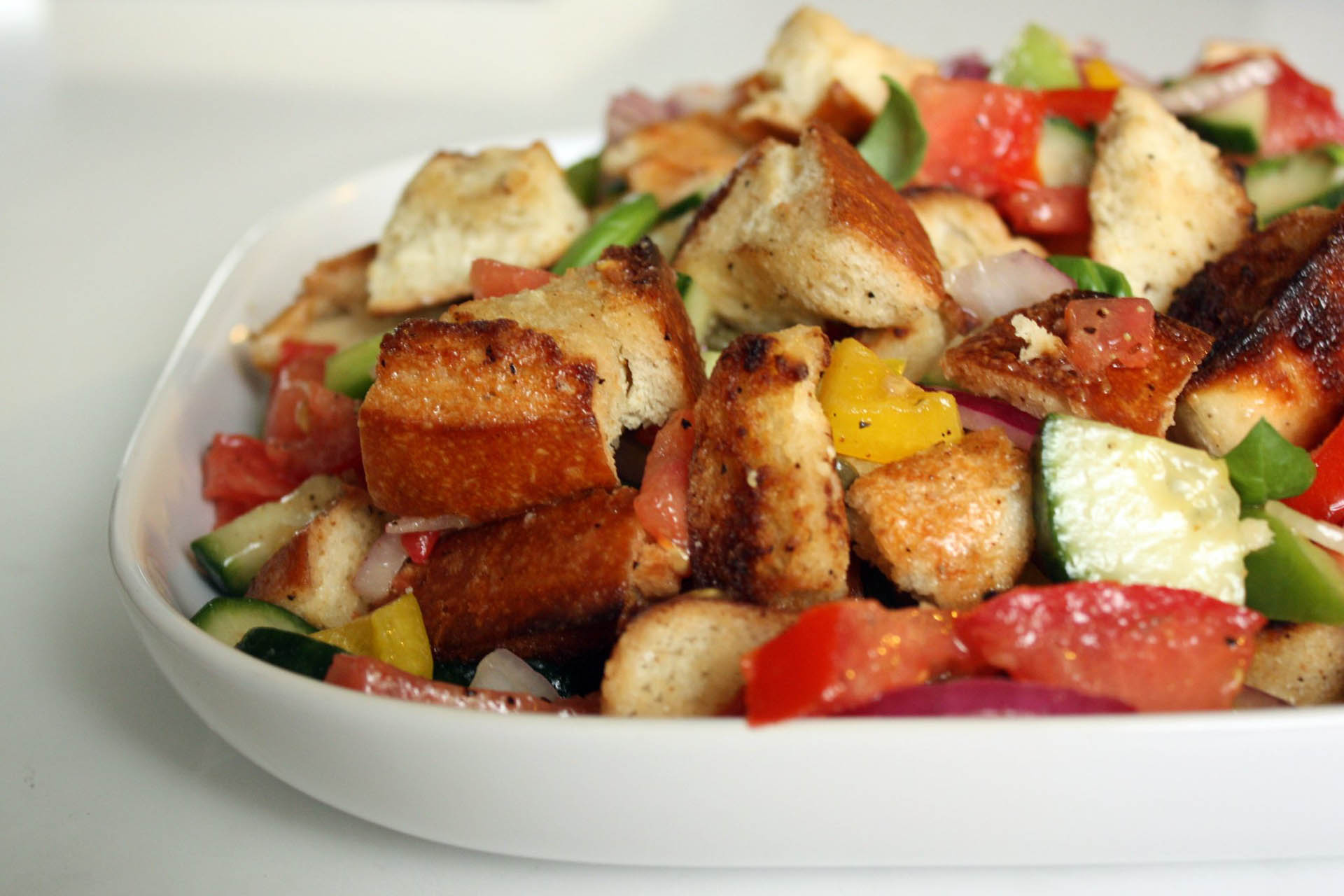 Panzanella is a summer dish typical of Central Italy, very appreciated in Tuscany, Umbria, Marche, Latium, Campania. It is once more a recipe born from poverty and necessity to reuse stale bread.

But as always, the use of great ingredients makes of this simple food a delicious summer dish.

It is documented that already in the XVI th century Bronzino, an important painter and poet at the Medici’s court, in one of his poems had elevated to celestial food a bread salad made with onions, cucumber, and arugula: basically, a Panzanella without the tomatoes. He didn’t know yet how greatly the recipe would be improved when tomatoes would be mixed in the salad, since they were imported from the Americas and didn’t start to be a common staple until the XVII century.

So, what is the secret of the Panzanella? It’s the stale bread, preferably unsalted, mixed with great tomatoes and herbs, superior EV olive oil, onions. And the rest is left to your fantasy, you can add cucumbers, or hard-boiled eggs, or canned anchovies or sardines, or more, but you really don’t need to: try it to believe!

Panzanella is a healthy dish: red tomatoes are a great source of lycopene a molecule that not only gives tomatoes their red color, but which has antioxidant properties with protective effects against certain cancers, and has the ability to lower the bad cholesterol LDL. Together with lutein and zeaxanthin, also present in tomatoes, lycopene protects your eyes from various forms of disease. In addition, all tomatoes are a great source of polyphenols and of vitamin C.
Among many other benefits, raw onions help lower cholesterol, and their anti-allergen effect helps people with respiratory problems linked to allergies.

The benefits of polyphenols and unsaturated fatty acids that are associated with the consumption of extra virgin olive oil have been explored at length and are summarized in The Gut Immune Connection, and have been covered in previous editions of this Newsletter. Basil also has strong anti-inflammatory properties, which can fight many diseases. So in this dish, the only ingredient that may be less advantageous is bread, but you can easily substitute the white bread with whole grain bread, rich in fiber and nutritional properties. And don’t forget, the great satisfaction that you get from this dish is the feeling of satiety, that will not bring you back to the refrigerator too quickly.

Ingredients:
1-2 slices of stale bread per person – style sourdough, ciabatta, Tuscan bread loaf. NO pre-sliced bread!1-2 tomatoes per person: whatever tomato you have that is naturally ripened, not kept in the refrigerator, and preferably bio. Heirloom tomatoes work great, but also tomatoes on the vine as well as Roma tomatoes, as long as they are ripe and flavorful.3-4 Basil leaves per person or as you like1 green onion per person sliced thin

1. Cut the washed tomatoes in small cubes, put in a salad bowl, making sure to save all the juices.

2. Cut the Basil by hand and add it to the tomatoes.

3. Slice the two kinds of onions and add them to the tomatoes, gently mixing everything together.

5. Refrigerate for at least one hour – or keep it outside the refrigerator covered with a clean kitchen towel.

6. Cut the Stale bread in cubes. Reserve on the side.

7. 30 minutes before eating, fold in the bread, making sure it absorbs all the juices.