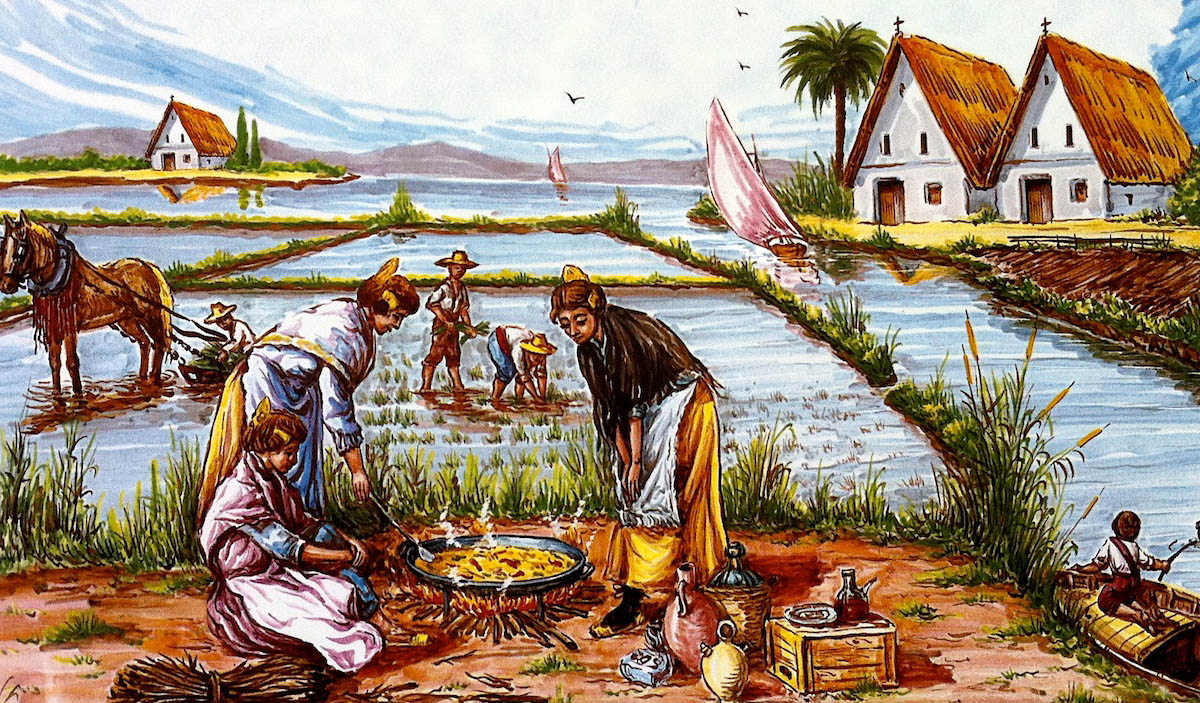 Paella is one of the most popular and famous of global dishes, but to define exactly what paella contains is almost impossible. There are as many variations of paella as there are cooks, with many claiming that their recipe is the best tasting or most authentic. The origins of the dish, however, are quite humble. Understanding a little of its history will help explain why so many varieties exist.

Valencia is where the Romans introduced irrigation followed by the Arab conquerors that brought rice, and perfected the rice farming. No surprise the best and most authentic Paella comes from Valencia.

Valencia is in Eastern Spain. It is one of the largest natural ports in the Mediterranean and has been one of the most important rice-producing areas in Spain since rice was introduced by the Moors over 1200 years ago. In fact, the Spanish word for rice is ‘arroz’, which is derived from Arabic, not Latin like most of Castilian Spanish.

Paella was originally farmers’ and farm laborer’s food, cooked by the workers over a wood fire for the lunchtime meal. It was made with rice, plus whatever was at hand around the rice fields and countryside: tomatoes, onions, and snails, with a few beans added for flavor and texture. Rabbit or duck might also have been added, and for special occasions, chicken plus a touch of saffron for an extra special color and flavor. Paella was also traditionally eaten straight from the pan in which it was cooked with each person using his own wooden spoon.
Little by little, as ‘Valencian rice’ became more widely available, paella recipes were adapted with new variations appearing. With Valencia being on the coast, it is no surprise that various types of seafood crept into the recipes over the generations. Now paella is the generic name of 200 or so distinctive rice dishes or ‘arroces’ from the Valencia region alone, not to mention other parts of Spain and the rest of the world. To this day a “true” Paella Valenciana has no seafood but a mixture of chicken, rabbit, and snails with green and white beans.

Where does the name Paella come from?

It’s a little confusing but ’paella’ or to be more exact ‘la paella’ is the name for cooking pan itself and not the dish. The word comes from old Valencian (in Valencia they have their own language somewhat similar to Catalan) and probably has its roots in the Latin ‘patella’ meaning pan.

There are however, some other wonderful (if less likely) theories about the origins of the name. The most romantic of them suggests that the dish was first prepared by a lover for his fiancée and that the word is a corruption of ‘para ella’ (meaning ‘for her’ in Spanish). Like all myths there is a small grain of truth in this and although many women still traditionally do the cooking in Spain, making paella is usually left to the men – very much like BBQs in the US!!!

It has also been suggested that the word ‘paella’, is derived from the Arabic word “Baqiyah”, which means ‘leftovers’ – once again emphasizing both the dish’s humble and Arabic beginnings.

Paella is the most sociable of all culinary occasions

In Spain paella is still unique. Not only do families congregate in restaurants to eat paella, but it is often cooked at weekends at holiday homes or at beach or mountain picnic sites. There are many paella competitions all over Spain and very often a giant paella is the centerpiece for many fiestas.

It’s easy to see why – paella can create a party, a ceremony, and a debate (often over the making of the paella itself!!) – making it one of the most sociable and enjoyable of all culinary occasions.

The Paella pan is characterized by being round with a flat bottom. The pan can be anywhere from 12 inches in diameter to several feet wide. The one thing that doesn’t change is the height. It is about first joint in the thumb deep as the Spanish would say, so that the rice has maximum contact with the bottom of the pan.

The most popular rice is Bomba rice, a small, rounded size grains that absorb the flavors and stock well but keep their shape. This is different than the rice for Risotto that breaks up a bit and develops a creamy texture.

The Meats and Vegetables

Depending on the region in Spain, the meats and vegetables added to the Paella vary. Paella can have several or no meats in it, including abbit or chicken and snails. Seafood can be shrimp, mussels, clams, and calamari.

Onions and garlic are a must, and very often you will see fresh peas or beans as a garnish. Artichoke quarters, green and red bell peppers are often used.

Saffron is on every Paella, it gives not only a nice background flavor that is earthy, but a nice yellow color.

1. In a large saucepan over high heat, bring the seafood stock to a simmer. Add saffron and keep war.

2. Meanwhile, put a large (16-inch) paella pan over medium-high heat add some olive oil and sauté the shrimp until they change color, set aside and reserve.

3. Add more oil to the pan. When hot, add the onion and sauté translucent, tiring often.

4. Add the garlic and cook until aromatic (about 1-2 minutes). Before it starts to brown, add the peppers, and green beans, and stir, then add the tomato and continue to stir adding the paprika and a pinch of salt. Continue to stir and sauté until the tomato is reduced and the oil is sizzling.

5. Gently add the squid to the pan and stir to coat in the tomato mixture, to give some color to the squid, then add the green peas and mix them.

6. Next add the rice and stir to combine. After a minute of sauteing, spread the rice evenly across the pan, it will be a thin layer that will later grow thicker.

7. Gently add the simmering stock to the pan, all at once. Reduce the heat to low and cook without stirring for 15 minutes. Carefully lay the prawns/shrimp in a circle on top of the rice to cook for a further 5 minutes. If the rice starts to dry out before time, you can top it up with a bit more stock.

8. When the stock of the paella pan fully evaporates, you will hear a faint cracking from the bottom of the pan as the socarrat starts to form. If you don’t hear anything, you can raise the heat to medium for a short burst.

9. After 20 minutes of cooking, turn off the flame and cover the rice with a kitchen cloth and let it sit for another 5 to 10 minutes and serve immediately with lemon wedges to add some lemon juice to the rice before eating.