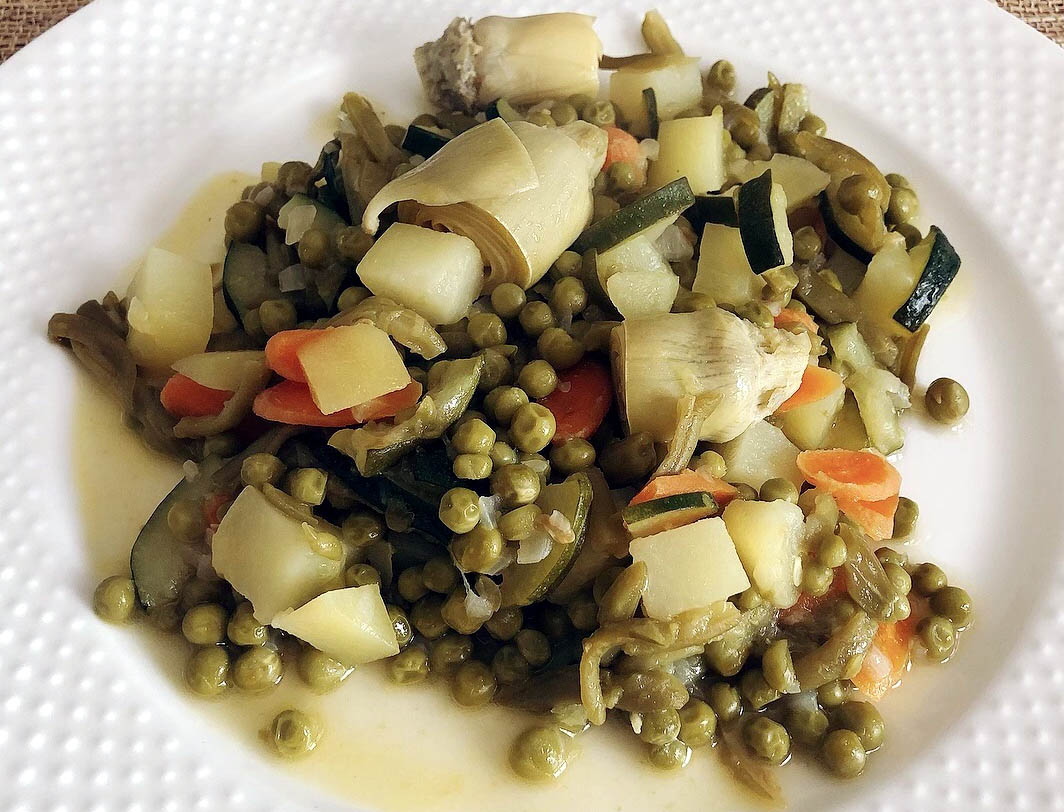 Menestra, a vegetable stew found in many parts of Spain, and which usually contains a nice mix of root and green leaf veggies. Some menestras are so substantial they can be served as a main course for lunch.

There is no single recipe for a menestra and the dishes that go under this name are more than simple variations on a theme. All of them make use of vegetables in season and some include other ingredients for which a particular area is famous. But menestra usually means a dish of vegetables, so it’s ideal for vegetarians.

This dish is a very traditional recipe in northern Spain, especially around Navarra or La Rioja where they grow many of the ingredients needed for this dish.

Ingredients:
2 medium potatoes
12 green asparagus spears
2 carrots
10 artichokes
1/2 lemon
½ lb. grams of green beans
1 finely chopped onion
1 lb. petite green peas
Vegetable broth
¼ cup dry sherry wine
Extra virgin olive oil
Salt
Preparation:
1. Peel the artichokes. To do so, cut the top part, remove all the outer leaves and the tail as well. Cut the artichoke in half and remove the “hairy” part that you’ll find in the middle using a spoon. Keep the peeled artichokes in a bowl with cold water and a few drops of lemon juice.2. Peel the green beans and carrots. Chop the carrot horizontally into medium-size pieces. Wash the asparagus spears and cut them into pieces as well. You can get rid of the thick bottom part. Peel and diced the potato into cubes.

3. Heat a small pan with two fingers of olive oil and fry the potato over medium heat, stirring occasionally until it starts to brown on the outside.

4. Remove the potato chips and place them in a bowl lined with paper towels.

5. Boil the peeled artichokes for 20 minutes, or until soft (you can pinch them with a fork to check them). Boil the broad beans for 5 minutes in the second saucepan. Strain them and reserve 1/4 cup of water from the artichokes. (Skip this step if you have bought pre-cooked artichokes).

6. Heat 1 tablespoon of olive oil in a pan over medium heat. Add the carrots, green beans and cook for 20 minutes. Add the green peas and 1/4 cup of vegetable broth and cover the pan.

7. Add the asparagus and stir-fry them for 3 minutes.

8. Add the sherry wine and the rest of ingredients as well as 4 tablespoons of the water from the artichokes and stir-fry for another 2 minutes, adding salt and pepper if necessary.