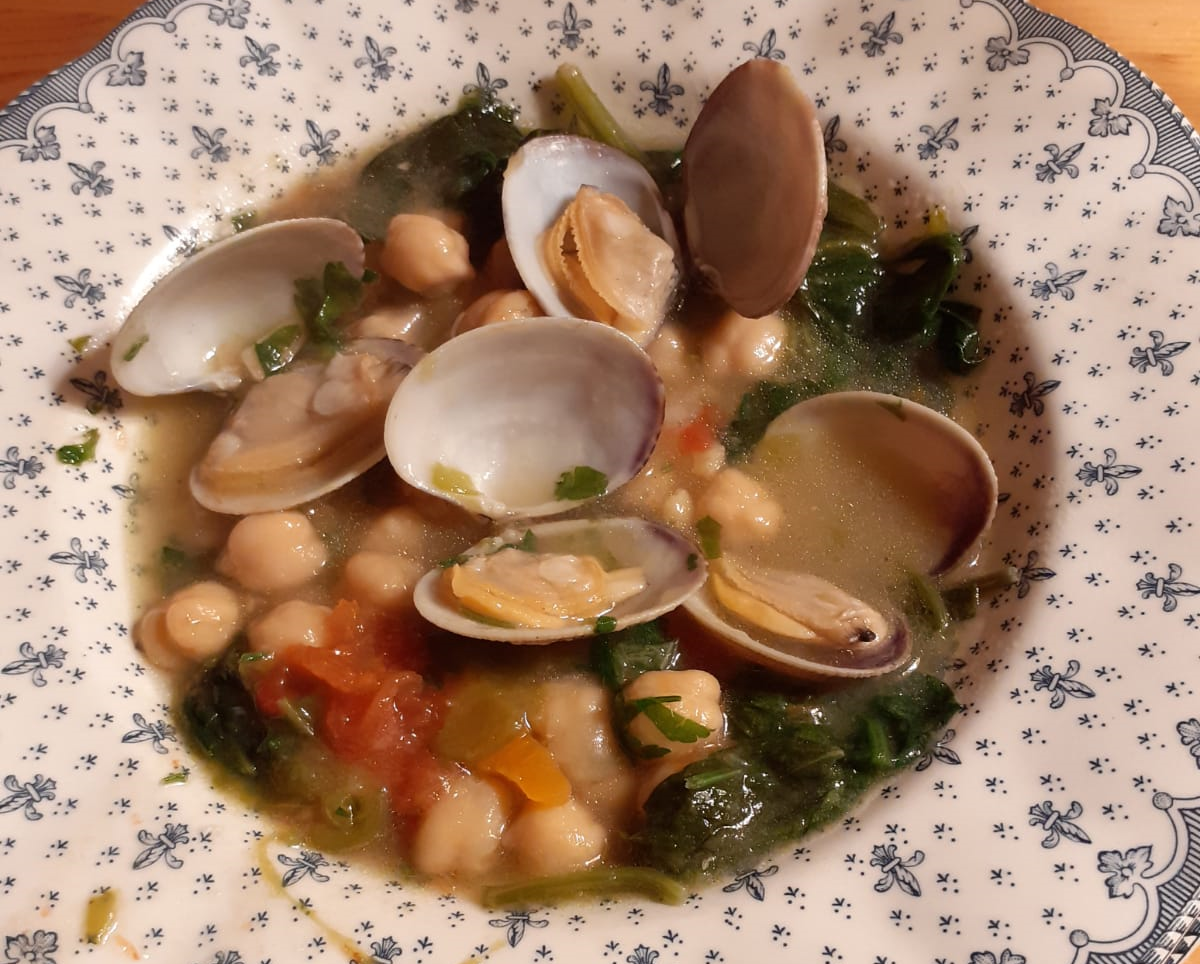 Garbanzo Beans with Spinach and Clams

Spanish spinach and garbanzo beans is a must try dish, especially popular during the cold winter months and during lent.

This dish comes from Ancient Persia (modern Iran), where Arab traders got their hands on it and introduced it to the Mediterranean. There are records of spinach being a popular Spanish vegetable by the end of 12th century, and it was an important ingredient in Moorish and Sephardic Jewish cuisine in Spain.

Garbanzos originally came from the Middle East and made their way into the Spanish kitchen by way of Phoenicians. They are of big importance in the Spanish cuisine, and they are a primary ingredient in many popular Spanish dishes.

Garbanzos are a rich source of vitamins and minerals, high in protein and a great replacement for meat in many vegetarian and vegan dishes.

I have added spinach to my recipe, but it can be made without clams.

Preparation:
1. Place the garbanzo beans in a large saucepan or bowl with salted worm water. Let it stand 8 to 24 hours. Drain before cooking.

2. In a pressure cooker place garbanzo bean, peeled onion, leek and let it boil for a short time, then remove foam on the top.

3. Add the rest of vegetables except spinach, close pressure cooker and let it cook for 10 minutes starting to count when it beeps.

4. Remove, onion, spring onion and leek, grind it and place it back in the cooker.

5. Add spinach, close cooker, and let it cook for 5 minutes.

6. Right before serving, place some oil in a pan with the garlic cloves (than you remove later), a splash of white wine and some finely chopped fresh parsley and clams, sauté he clams until they open. Add to the garbanzo bean mix, heat it up and then serve.

Marta Díaz Megías was born and raised in Madrid, Spain and is as an official Translator/Interpreter from the Catholic University of Paris. She has always had a personal passion for cooking and started her own catering company in Madrid, and taught cooking courses for several years as well. Marta now lives in Southern California and loves promoting Spanish cuisine.

Posted @withregram • @lewishowes “I get sent a