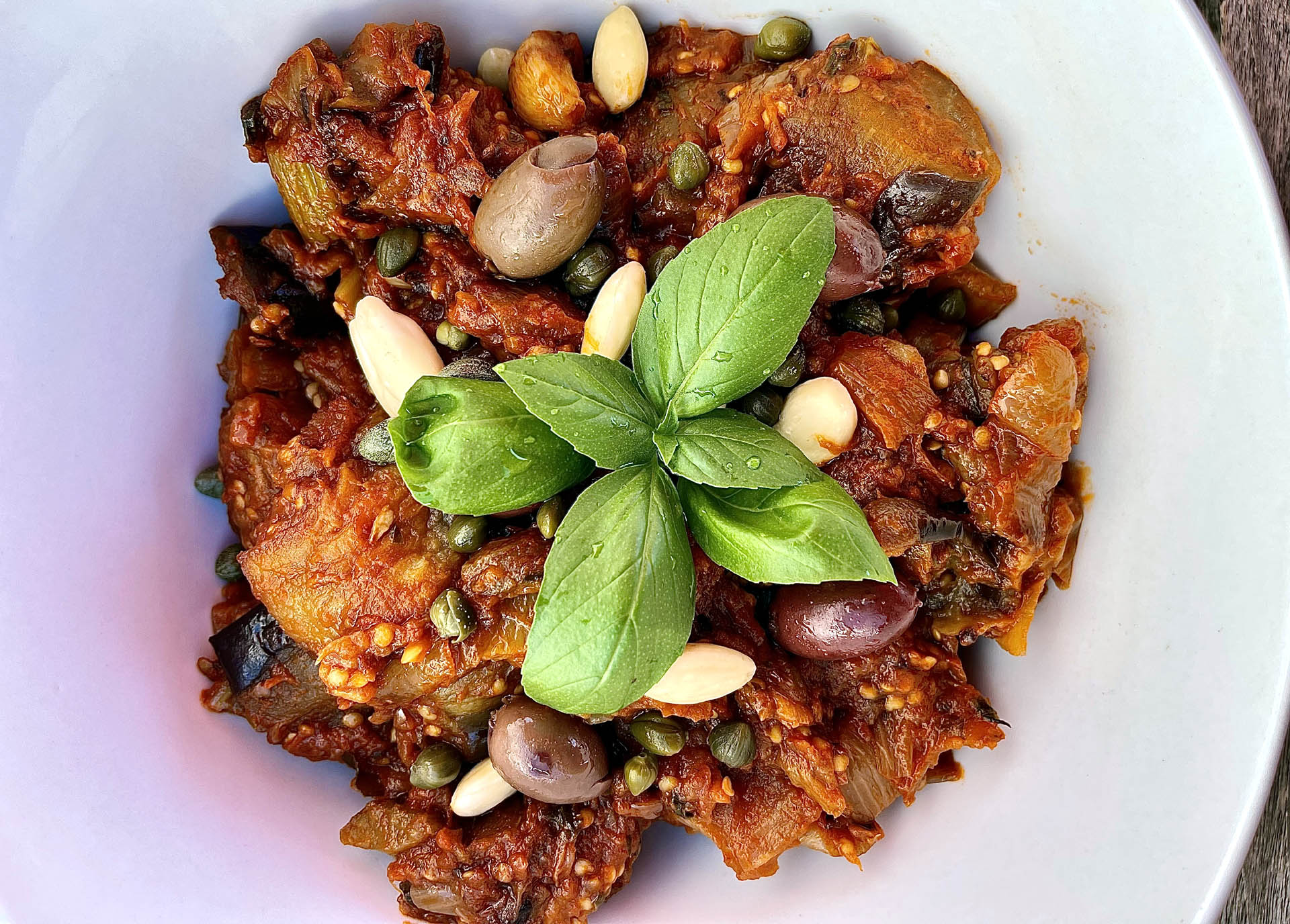 There is nothing more summery than this fiery Sicilian dish, based on one of the most easily available and cheap vegetable worldwide: eggplant.

This weird looking, deep purple and shiny vegetable used to have a bitter aftertaste. In my youth I remember cut and salted eggplant layered on clean kitchen towels staying for hours to purge on the kitchen table. But this characteristic is not present anymore in the varieties commercialized in the US, so you can skip this step, making it even easier to use.

The plant was probably introduced in Southern Europe by the Moors in the 8th century, as the Arabic name “al-badinjan” proves, slowly changed in many European languages as “aubergine” in French and “berengena” in Spanish. The Italian name, Melanzana, comes from the Greek version of it, where it took from the word “melas”, meaning the color black.

Interesting enough the English name comes from a variety very rarely seen nowadays of small white round plants, resembling… eggs! In any case the consistency of eggplants is unmistakable: sponge-like and with the capacity to absorbs flavors. Select the varieties with as little seeds as possible, as they can be a little bitter and annoying in the mouth.

Eggplant is particularly low in calories and high in fiber, which makes it a great food for a diet. But careful, because it can absorb a lot of sauce and oil, becoming a very rich dish!

Caponata is a vegetable stew with just a few more ingredients apart from eggplant. It has a cousin in France called ratatouille, that has a similar preparation but much more mellow taste, and similar dishes in the whole Mediterranean area. But the unique characteristic of caponata is the sweet and sour taste, probably inherited from the Arab influence on Sicilian food. It was born as a vegetarian dish but is now mostly served as an appetizer or side dish. The fact that it is best when prepared the day before and served cold, makes it a fantastic recipe for entertaining or for those summer picnics on the beach. Variations on this recipe are numerous, as always in Italian cuisine, but I like to propose to you this one, who has accompanied me all my life without ever letting me down!

Ingredients (6 Servings):
2 large eggplants, washed, peeled following a zebra pattern
Celery, approximately 3 sticks, washed
1 large Yellow Onion
2-4 cloves of garlic, whole
1 pound of drained chopped tomatoes (from a can or fresh if you can find nice ripe tomatoes)
Dry Oregano, Hot Chili Pepper, Basil
1 tablespoon Nonpareil Capers
¾ cup of pitted olives – I prefer black kalamata ones, but it’s your choice
2 tablespoons of white wine vinegar
2 tablespoons of honey
EV Olive Oil
Salt and pepper
Preparation:
1. Turn on the Oven @ 360 F on Roasting, if you have this option, if not Convection bake, if not Bake.

2. Cut the eggplant in cubes, approximately ½ to ¾ inches, pat dry with paper towels, put in a large kitchen bowl, drizzle with EV Olive Oil, season with salt, spread on a parchment paper lined baking sheet in one layer, and put in the warm oven for approximately 20 minutes until it starts to brown.

3. Drizzle some oil in a large nonstick pot or pan with high sides. Pat-dry the celery, chop it in rounds, transfer to the hot pot and let it sizzle gently.

5. In the meantime, chop the onion, large chunks. Add it to the celery. Keep on cooking stirring from time to time until translucent, it will take probably 10-12 minutes. Remove and set aside.

6. Transfer the cooked eggplant in the same pot without washing, and let it brown gently, stirring from time to time delicately so as not to smash the cubes. The eggplant should have absorbed enough oil from the previous step, so normally you will not need to add more. When nicely brown on all sides, and significantly reduced in volume, remove from the pot, and set aside – probably 10 minutes.

7. In the same pot, add tomatoes, 2 cloves of garlic, a few leaves of washed basil, a pinch or two of dried oregano leaves, salt. Let it cook on a strong flame, stirring regularly so the preparation doesn’t stick to the pot. Season with salt, pepper, and some hot pepper as desired.

8. When all the juices from the tomatoes are evaporated and you have a thick sauce, add back cooked eggplant, onion, and celery. Stir gently from bottom to top to coat all vegetables in the tomato sauce. Boil gently for 10-12 minutes, making sure that it does not stick to the bottom.

9. Prepare the final seasoning: mix 2 tablespoons of vinegar with 1or 2 tablespoon of honey, dissolve. Pour on the caponata and mix. Turn off the flame.

11. Let it cool and put in the fridge overnight.

12. Taste before serving, and adjust seasoning as desired.

And always remember: Italian cuisine is made for cooks at heart, follow your gut feeling and add or reduce quantities as you like!!

Elisabetta Ciardullo is the founder of Think Italian! Events. As Personal Chef she is an ambassador of the Italian cuisine and culture, bringing it into the private homes of Americans, as well as to many corporate clients in Los Angeles.