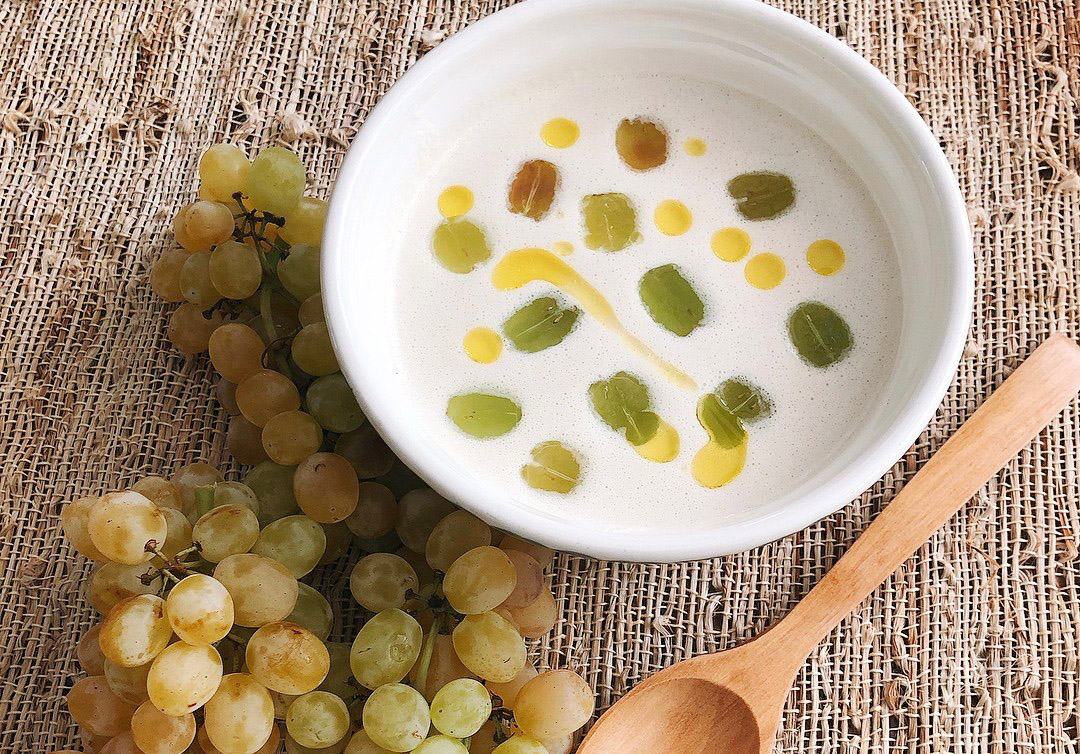 Ajoblanco is one of the original and oldest of the cold soups, a very traditional dish in the southern Spanish region of Andalucia. Not as well-known as the other types of soups of this style, such as gazpachos or salmorejos. Ajoblanco is refreshing and full of flavor and 100% plant-based protein.

The dish has its origins in the Roman cuisine, which was introduced by the Romans to the Province of Hispania; a name given to the Iberian Peninsula and its provinces, (218 BC – 5Th Century).

This traditional Andalusian cold almond soup is known as the precursor of gazpacho. It originated during the Moorish Middle Ages, (years 711 – 1492) predating the arrival of tomatoes and peppers by several centuries, this dish is generally made of bread, water, oil, vinegar, fresh garlic, and almonds. Its origin can be traced back to some popular Roman soups made of vinegar, oil, and bread, all in equal parts. Although it shares origins with Roman cuisine, ajoblanco is greatly influenced by Arab cuisine, with its extensive use of almonds, which has influenced this recipe to make it today’s ajoblanco. (The Moors were in Spain for almost 8 centuries, from the year 711 to 1492). Andalusian farmers have been working in the agricultural fields for thousands of years, sunrise to sunset, under a suffocating temperature of 40ºC, sometimes more. And to feed themselves avoiding dehydration under such high temperatures, nothing better than a cold soup!

Ajoblanco is one of those traditional dishes that belongs to the well-rooted tradition of Andalusian cold soups. Perhaps the gazpacho or the salmorejo are better known these days, but ajoblanco came first, dating back from a time when tomatoes had not arrived yet from the Americas, (today’s South America).

The perfect starter for a summer meal (Spanish eat the main meal in 2 courses, starter, and main dish), ajoblanco should be served chilled and together with some sweet white grapes and/or some bits of melon.

If we walk through the Spanish Mediterranean countryside, we soon see an almond or a hazelnut tree. Its flowering at the end of February constitutes a spectacle of great beauty. Behind this bucolic stamp there is an entire industry, which has led Spain to be the second largest producer of almonds behind the United States.

Spanish almonds are characterized by a higher fat nutritional value, which provides greater taste compared to American or Australian almonds. Spain’s latitude and climate, together with the number of almonds available in each harvest, make an attractive product for different sectors.

Ingredients:
7 oz Raw Almonds – Peeled – Spanish Marcona Almonds would be the best choice
2 garlic cloves
3 oz White bread– Stale bread is much better! Ideally from a white loaf.*
30 oz Mineral/filtered water
2.5 oz Extra Virgin Oil
1/2 oz Sherry Vinegar
Salt to taste*(The principal role of bread is to provide texture to the soup, so don’t use soft bread, but stick to a denser white bread which will not turn mushy upon soaking in water and will also keep the soup pristinely white).To Garnish:
Sweet white grapes cut in halves

1. Toast the almonds slightly to enhance their flavor, be careful not to over toast them or they will add color to our white ajoblanco.

2. Soak the bread in 1/2 cup water for 1 minute, then squeeze dry, discarding the excess water.

3. Put bread into a food processor or a blender. Add the almonds, the garlic, and a dash of water. Blend thoroughly until you get a very fine paste. With the motor still running keep adding the rest of the water, the vinegar and finally the oil, little by little, so it emulsifies properly.

4. Season to taste and sieve once or twice to get a super fine and smooth cream. Chill for at least 90 minutes — although it will taste much better if you leave in the fridge overnight.

5. For the garnish, halve some grapes. Drizzle with some drops of extra virgin olive oil and serve well chilled.